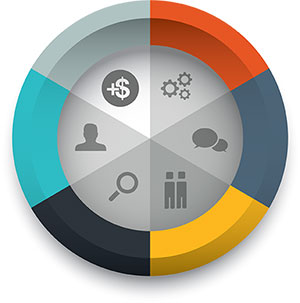 We provide you with full reporting and actionable insights. Get a full understanding of the value of your audiences, network and the bidding strategies of each bidder. We store each bid and give you insight in the full bid book.

Our mission is to create a level playing field. Everything we do is focussed on maximizing your revenue. Adsolutions is spezialised in developing products for publishers, sales networks and ad networks. We truly understand all of your challenges and offer custom solutions to solve them.

We offer an easy one time setup. You control all settings centrally. Set your floorpricing and easily add and remove bidders. Create a fully responsive ad setup, decide which ads to be shown per screen size. No more latency because of the asynchronous loading and control over timeout settings.

We’re here to help and love a challenge. We will fully support you in the setup fase and beyond. Our wizards can help you analyze the data and setup a custom dashboard with your KPI’s so it’s easy to view what’s actually going on with your properties and inventory.

We’re connected to 40+ partners and this amount grows daily.

Every publisher or ad network who started using our header bidding software has seen an increase of revenue of 20-60% directly from the start. Switching from a traditional waterfall/adserver setup will immediately grow your revenue. Adding more bidders will increase the revenue even further. Additionally our header bidding solution is much easier to maintain and will save you a lot of time. Our reporting will give you insights of the bidding strategy of all bidders. We will show you the value of all placements an audiences, providing you the right ammunition for your sales-meetings.

We have over 15 years experience in working with publishers, ad-networks and sales-houses. We truly understand all of your challenges and offer custom solutions to solve them. During a preliminary strategic session we discuss all wishes and possibillities. If needed we can help you out with setting up all line items.

Long loading times will scare away your visitors and will cost you a lot of revenue. Our software is setup to prevent all forms of latency. Because of asynchronous loading you don’t have to wait for all placements to be loaded. Configure the time out settings to prevent any accidental issues from causing latency problems.

Yes header bidding requires ongoing maintenance. We constantly add new features to our software and our support team is always available to make tweaks for you specifically. Our team is big enough to develop the best software around and small enough to offer you personal support and custom solutions. Adsolutions has offices in Amsterdam and Milan.

EVERY IMPRESSION INITIATES A NON-BIASED AUCTION ACROSS EVERY INTEGRATED BIDDER, COMPETING REAL TIME FOR YOUR INVENTORY. THE WINNING BIDS ALSO COMPETE WITH DIRECT CAMPAIGNS IN YOUR AD SERVER.

The client-side logic is based on a driver implementation, so that on decision points custom actions can be provided. Read your logic is easily implemented.

Allows multiple auctions to run simultaneously. This allows to create complex client side logic. (For example: create a tier based setup, or create pricing rules for banners which have an alternative size: let’s say on a 728×90 placement a billboard is served. That the billboard should have at least a10% uplift above the average 728×90 price.) And the possibility to create complex webpages as infinite scrolling pages or SPA’s. As the bidding process becomes independent of the rendering and decision process.

Easy integration with the defined placements for the ad server via TAGMAN.

Collection of statistics of the returned bids.

Client and ad server side decision options. (For example the client could decide the received bid is valuable enough to directly render it. By-passing the ad server. Or the ad server might decide to render the ad of a certain bidder, even if it has not provided the highest bid but you want to push a certain amount of volume to a certain source regardless.)

ADBid™ runs in its own container, this allows for memory management to recycle an often used instance, or will be able to recover if a library won’t load at all.

With Header Bidding by Adsolutions the total inventory can be exposed to the exchanges, in essence giving them the same first view the ad server has. This allows for parallel decision making instead of a waterfall based.